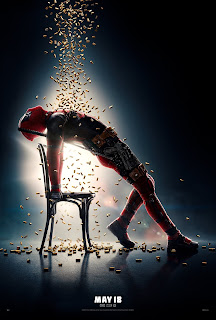 Mucking Up the Timeline
or
"Too Far? I Went Too Far."

Deadpool 2 begins with a bang. "The Merc with a Mouth" (Ryan Reynolds) is alone in his apartment—in full uniform (does he do that a lot or just special occasions?)—kvetching about Wolverine again and how not only Logan was riding his coattails with an "R" Rating, but how the stupid "snickter" one-upped him by dying in that movie. And so he makes himself a couple of Hot Pockets in the micro-wave, turns on the gas on his oven and lies down on top of a few convenient drums of gasoline, lights a cigarette and blows himself to bits.

Well, there is a movie after that and it's good in fits and starts with the occasional laugh-out-loud line ("Who came up with that? Probably some guy who can't draw feet"), but if you're discriminating and want to keep the rosy-blood-red glow of the original in your mind, you might want to skip this one. Yes, it has Josh Brolin as Cable, Zazie Beets as Domino, an appearance by Juggernaut and even the formation of an "X-Force". (Big Spoiler: They almost all die. Nyuck-nyuck).

In fact, a lot of people die. Important people in the narrative.

And then, within the movie, they fix everything and everything turns out all right.*

Less "nyuck" than "yuck." There are no stakes in Deadpool 2...at all (curiously, you did in the first one, even though it has the same air of larky nihilism). It's what happens when you throw in a time-travel ability into a comedy. Hit the chrono-switch and fix everything that might be risky...and it gives you a chance to repeat some jokes. As Deadpool says at one point "Now that's just lazy writing." 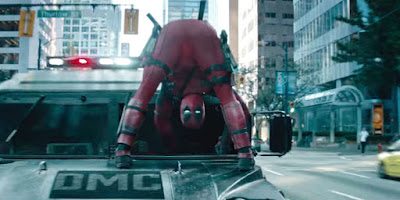 After surviving a near fatal bovine attack, a disfigured cafeteria chef (Wade Wilson) struggles to fulfill his dream of becoming Mayberry's hottest bartender while also learning to cope with his lost sense of taste. Searching to regain his spice for life, as well as a flux capacitor, Wade must battle ninjas, the Yakuza, and a pack of sexually aggressive canines, as he journeys around the world to discover the importance of family, friendship, and flavor - finding a new taste for adventure and earning the coveted coffee mug title of World's Best Lover.

Anyway, in the movie I saw, DP blows himself up after something depressing happens—it's mocked in the Bondian opening credits, which ends with the tag "directed by one of the guys who killed the dog in John Wick—and X-Man Colossus puts DP's parts in a Glad-Bag and drags him to Xavier's School for Gifted Youngsters to try and pull himself together. He even offers him a membership in the X-Man ("trainee" everybody has to add). Deadpool isn't buying it. "I'm not 'X-Men' material: first off, I'm not a virgin." Nor does he want to be (as he puts it later) "a dated metaphor for racism in the 60's." Good points, all. 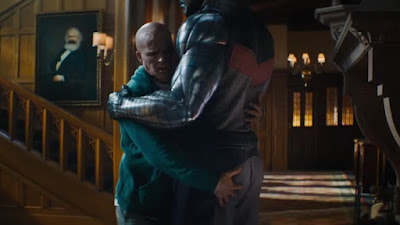 But, Colossus and Negasonic Teenage Warhead (Brianna Hildebrand) drag him to a "Mutant Re-education Center" on the X-jet where one of the students, Russell Collins (Julian Dennison, the kid from Hunt for the Wilderpeople), who calls himself "Firefist" us having a literal melt-down, meaning he wants to melt the orphanage down and kill the administrator and a couple of the orderlies for good measure. The other X-people want to try and corral him, but Wade wants to talk to the kid and try and calm him down that way. How well does that go? The movie's only 30 minutes old, so you tell me.

No, it does not go well and Firefist and Deadpool are sent to the Icebox—a prison for mutants—wearing those Universal Power Dampeners that seem to work on everybody despite them having wildly different powers. There, Cable (Brolin) enters the scene because he's come back in time to kill the kid because he'll cause something devastating in the future and blah blah "killing Hitler as a child" blah. So, it's up to our titular hero to save the kid he barely knows, even if he does become a fiery Hitler, because...plot.

It's here that I kinda checked out except for a few meta-chuckles along the way (sorry, "meta" is DC) because as much as I like nihilism in movies, I don't like my sociopaths to be warm and fuzzy ones (maybe that's why I didn't find John Wick funny or worthy of attention). I prefer Deadpool to be an outlier and an unhinged cannon who's not much of a "joiner" so much as a blaster-aparterer. If the character works, it's because he succeeds despite himself...and because, basically, you can't kill him, you can only kill his box-office. So, the whole "team-up" thing doesn't work for me with him.

Nor does the whole idea that he can do anybody any good except if they need to be perforated. He's a berserker, nothing less and nothing more, and the fact that he's a super-expositionist and meta-commentator makes him even more so. I mean, no fourth wall is safe around him, be it by mayhem or malarkey. It will crumble like the second weekend receipts for a DC movie.

This is a problem. Not, of course, if you're just there to guffaw at the more obvious jokes or the clumps of celebrity cameo's (and, of course, Matt Damon is one of them because he's in everything) if one cares. Truth is Deadpool 2 is full of material that has a very brief shelf-life without shoring it up with anything that might resonate or push the franchise further. It's merely a placeholder where nothing much matters, doesn't expand the Deadpool character or his story-arc. On top of the that, the fights are sloppy—the whole thing's kind of sloppy.

The most repeated line—besides "trainee"—is "Family is an "F" word.

* Actually, that happens in the "credits" scenes, so stick around for that. You can fix and fore-shadow anything in post-credit scenes.
Posted by James S. Wilson at 7:30 PM