This was written at the time of the film's release, when Ben Affleck once played "Superman" of a type. I've only walked out of two movies—the Eddie Murphy/Dudley Moore so-called comedy Best Defense...and this one. I can tolerate a lot, evidently. But I have my limits. As I recall, I labeled this movie "a waste of time."

All reviews are personal; they are opinion, after all, shaped by life and experience. This one seems more personal than most. I should avoid doing that.

It's been a long time since I'd seen a new movie--the last was Superman Returns--and I'd compiled a short list in my mind of films I wanted to see, and should, as the Holiday Movie Season was galumphing closer. Hollywoodland—another "Superman" movie of sorts—was the first released on the list, and by coincidence it was playing at the Uptown Theater on lower Queen Anne just a couple of blocks from where my business' post office box is.

I'd been following the movie's production process for years. Kyle McLachlan was attached, then not. It was greenlit, then not. "Snake-bit" was more like it. It was based, supposedly, on the investigation into the George Reeves' (TV's winking "Superman" in the 50's) suicide, which had more than enough "urban legends" attached to it to make an interesting idea for a movie. Besides, I liked Reeves. And his co-workers 'descriptions of him belied the depressed suicide scenario that was the accepted explanation. 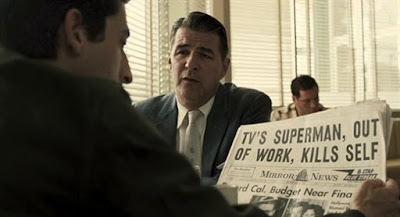 But if you're looking for answers, Hollywoodland gives you none. What it gives you is a shabby L.A. P.I. (Adrian Brody) late of studio security (nice angle, that), asked by Reeve's mother (Lois Smith) to investigate her son's death. She doesn't know who did it, but it can't be her shining baby boy. Also, true, supposedly. 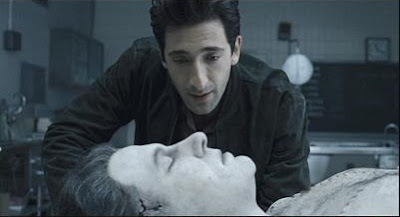 At that point, the movie goes awry. As investigator Louis Simo (who never really convinces you of "competence") goes over the details of Reeve's life, we are given the usual trope --big break in Gone with the Wind that never pans out, "B" movie existence, the dalliances, the affair with the wife of Eddie Mannix, "Superman" and its career-killing effects, the From Here to Eternity disappointment (cut from the final print because the presence of TV's "Superman" was considered a distraction—which is fiction, evidently) and the ultimate feeling that his career had dead-ended on a kid's show. Fortunately (and yes, its a surprise to say this), Reeves is embodied terrifically by Ben Affleck, who manages to convey Reeves' "nice guy" casualness with a "bad-boy" swagger that never trashes Reeves, but emphasizes the charm. Affleck becomes Reeves, to the complement of both. If only the rest of the movie did as much research.... 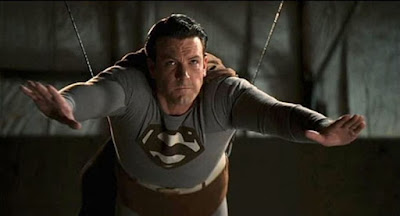 Reeves' "Superman" is shown flying with ropes. Uh...no. Didn't happen. Yes, he had accidents, but not like depicted (stage hands hauling a suspended Reeve around a dilapidated studio for flying scenes makes a funny, sad scene but it's just not true). Also, they hedge their bets on the suicide angle by having the "Superman" series cancelled (celebrated by Reeves with a bonfire of the vanities, burning his "Super-suit" on the barbecue--really, they'd let him have that?) when, in fact, "Superman" was about to go back into production with several episodes to be directed by Reeves. Suicide is a bit harder to swallow when a guy's got career possibilities ahead of him. That aside, the movie also starts hedging its bets with the investigator's story--the deeper he digs, the more resistance he gets, the more determined he becomes to find "the answer" (Detective Movie 101), his personal life starts to disintegrate, he starts to drink, and act stupidly--and I began to hear faint echoes that indicated the screenwriter'd been dipping into Robert Towne's "Chinatown" script. Hmmm. 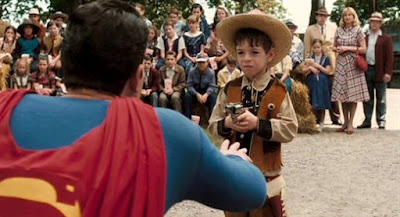 I could see where this was going--in the course of the detectives backslide, two possible scenarios of Reeves' death are played out as murder, but as the ersatz detective starts to spiral down into depression and drink it's only a matter of screen-time before he inevitably reaches that place where he would see it as natural for Reeves to commit suicide. The only surprise left in the movie being whether he follows Reeves in the death-wish. 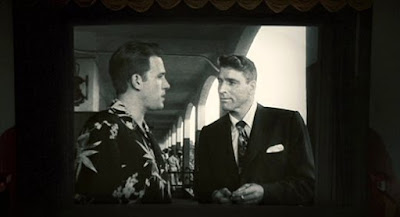 Now, earlier in the day, I had gone to a luncheon held by the temp agency I was working for and they gave me a little certificate for exemplary work—I'd been reviewed well and recommended for recognition. It was all very nice, but I couldn't help but dismiss it. This isn't the work I do. It's not work I love. I do it well, but I do it to make money. That's all. And in this sort-of telling of the Reeves story, that's exactly where he was, too. Stuck playing Superman, unable to do anything else because of it—hopelessly typecast and no prospects (in this telling of the story) for the future. I could relate. Too well. And as if to put a sick little bow on the paralleling, I had received at this luncheon a tee-shirt from the agency for my service...with a quasi-Superman logo on the chest of it--I was a "VOLT Superstar." Huh. It all felt a little too close. And watching the characters on-screen spiral to oblivion wasn't helping much. 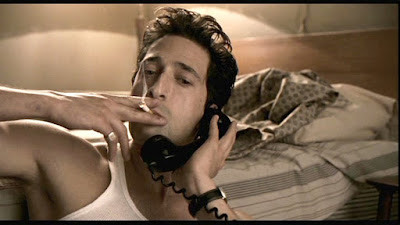 I checked my phone. Three calls. I should return them. I got up from my chair in the dark and headed for the lobby. I obviously had better things to do with my life and it was best that I get on with it. I walked out of the theater and outside into the sunshine.

The Story:  "Times like this, I'm best alone" he says on the fade from the White House corridor to the hat.

I know the feeling.

The Set-Up: Abraham Lincoln (Daniel Day-Lewis) is this close to passing the Thirteenth Amendment abolishing slavery in the House of Representatives. But petty squabbling in the House and his own Cabinet is keeping that from being accomplished. Most House Republicans, especially the fiery abolitionists led by Thaddeus Stevens (Tommy Lee Jones) will water down their positions in order for it to pass, but the Democratic minority will not budge, especially if it can bring a speedy end to the Civil War by negotiating a settlement, and abolishing slavery would make that negotiation dead before starting.  A secret negotiating team is heading for Washington now, and Lincoln does not want that knowledge watering down the urgency for abolition. Before dawn, he goes to the war-room telegraph office —where his secretaries Homer Bates (Drew Sease) and Sam Beckwith (Adam Driver)to send an urgent message to his Union commander, Ulysses S. Grant. He has one more tactic that he can pull...as he ever does...from his hat.

Lincoln is seated at Eckert's desk, shawl wrapped around his shoulders, glasses on; he stares down into his hat, held between his knees. Homer Bates and Sam Beckwith are waiting for him. Lincoln draws a handwritten note from his hat and carefully unfolds it.

Sam Beckwith transcribes Lincoln's words into code on a pad with a pencil.

LINCOLN (CONT'D) "I ask that, regardless of any action I take in the matter of the visit of the Richmond commissioners, you maintain among your troops military preparedness for battle, as you have done until now."

He stops for a moment. Beckwith waits, pencil poised. Lincoln looks at the note, folds it, tucks it in a band inside his hat. 75.

LINCOLN (CONT'D) "Have Captain Saunders convey the commissioners to me here in Washington."
(ANOTHER PAUSE)

LINCOLN And the date.

Lincoln places the hat on the floor.

LINCOLN (a beat, then:) You think we choose to be born?

SAMUEL BECKWITH I don't suppose so.
LINCOLN Are we fitted to the times we're...

LINCOLN ...born into?
SAMUEL BECKWITH I don't know about myself.

SAMUEL BECKWITH You may be, sir. Fitted.

LINCOLN (TO HOMER:) What do you reckon?

HOMER BATES ... machinery but no one's done the fitting.

LINCOLN You're an engineer, you must know Euclid's axioms and common notions.

HOMER BATES I must've in school, but...
LINCOLN I never had much of schooling, but I read Euclid, in an old book I borrowed.

LINCOLN Little enough ever found its way in here - (touching his cranium) - but once learnt it stayed learnt.

LINCOLN Euclid's first common notion is this: "Things which are equal to the same thing are equal to each other."

Homer doesn't get it; neither does Sam.

LINCOLN (CONT'D) That's a rule of mathematical reasoning. It's true because it works; has done and always will do.

LINCOLN In his book, Euclid says this is "self-evident."

LINCOLN  D'you see? There it is, even in that two-thousand year old book of mechanical law:...

LINCOLN  We begin with equality. That's the origin, isn't it? That balance, that's fairness,

He looks at his scribbled note, then at Sam and Homer.

LINCOLN (CONT'D) Read me the last sentence of my telegram.

SAMUEL BECKWITH "Have Captain Saunders convey the commissioners to me here in Washington."

LINCOLN A slight emendation, Sam, if you would.

LINCOLN (CONT'D) "Have Captain Saunders convey the gentlemen aboard the River Queen..."

LINCOLN "Do not proceed to Washington."

Lincoln is available on DVD and Blue Ray from Touchstone Home Video.