The War of the Worlds Through the Years 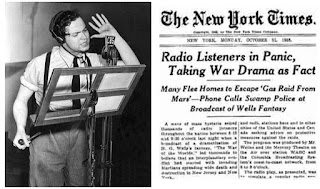 Seventy eight years ago tonight (at 8 pm EST, in fact), Orson Welles chose to do a radio broadcast just for Hallowe'en—a radio adaptation of H.G. Well's novel of "The War of the Worlds" on his "Mercury Theater On the Air" broadcast on the CBS radio network.

Welles' "Mercury Theater" show was not that popular, and so a lot of people didn't hear the introduction of the piece stating clearly that it "presenting 'The War of the Worlds' by H.G. Wells"; most of those listening to the radio at that time of the evening were listening to the more popular "The Chase and Sanborn Hour", which featured ventriloquist Edgar Bergen and his dummy Charlie McCarthy (yes, a show with a ventriloquist was very popular on radio). But, twelve minutes into the comedy show, there was a song interlude, and people did then what they do now—they surfed the dial, looking for something better until the segment was over and they could turn back.

And what they found was this:

At about twelve minutes in, the broadcast was just getting interesting: a faux dance music program was being presented and interrupted by "news bulletins" reporting that plumes of incandescent gas had been seen leaving the planet Mars and headed for Earth. A "return to scheduled programming." Then another interruption saying that meteorites have landed near Grover's Mill, New Jersey (as opposed to Woking, Surrey in Wells' novel) and Princeton expert Professor Richard Pearson (Welles) is brought in to speculate that there is no life on Mars. The next segment is a "live report" from Grover's Mill where "reporter Carl Phillips" (played by Frank Readick, who had "prepped" for this segment by listening to reporting of the explosion of The Hindenburg) reports on the opening of the cylindrical meteorites, the appearance of tentacled creatures wielding a death beam that incinerates the crowd... 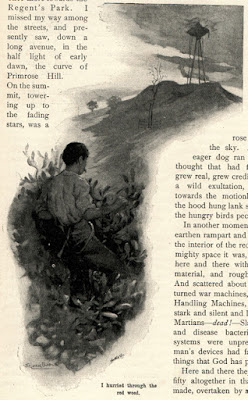 The original script (by the ubiquitous Howard Koch) was deemed too dull by Welles, and a new draft was created, inspired by an Archibald MacLeish radio-play "Air Raid" (in which Welles had appeared). The idea was not to dramatize events as in the novel, but to use the medium of radio to provide the context and the drama of how such an invasion might play out under the circumstances and over the air-waves. More than the audio of a staged play (as most of these things were), it was very much of its source—a radio-play, by, of, and about the experience of getting the news live over this new medium, unfiltered and immediately...without a chance for resolution.

"Panic" may be too strong a word for the result, and the newspapers played it up to discredit the reliance of radio for news,* but there were many, many, many people who heard the simulated news-casts and, now used to recent advances that allowed "news flashes" interrupting programming, and at a time when Germany was making moves on Austria and Czechoslovakia, took them for the real thing. A cursory search on the dial would have told them that the only network broadcasting the events at Grover's Mill was CBS, but the events were so compelling that not many switched away. Some merely left their radios in their panic to avoid "the coming invasion." It wasn't until the 43 minute mark in the broadcast (which ran no commercials as it was not sponsored) that the network broke in to remind listeners that they were, in reality, listening to a radio-play. This was necessitated as the CBS switchboard in New York was flooded with calls to the point of incapacitation.

For Welles, three things happened: he became a nationwide celebrity, "The Mercury Theater On the Air" got a sponsor and became "The Campbell Soup Hour", and Welles was lured to Hollywood by RKO Studios, where they hoped he might make a film of "The War of the Worlds," to cash in on the notoriety. He had other plans.

A film of "The War of the Worlds" would have to wait.

The War of the Worlds (Byron Haskin, 1953) Twenty five years after Welles' broadcast, George Pal made a Technicolor movie out of Wells' novel. Like the radio broadcast, it updated the story for the times. The time is the present and the phenomenon is world-wide while the film concentrates on cylinders landing in Linda Rosa, California, outside of Los Angeles. By chance, Dr. Clayton Forrester (Gene Barry), a scientist involved with America's development of the atomic bomb happens to be fishing nearby when the nearest craft zooms overhead. Investigating, he finds a crowd of people, including Linda Rosa residents Silvia van Buren (Ann Robinson) and pastor Matthew Collins (Lewis Martin), her uncle. The glowing craft is giving off radioactivity and so three locals elect to stand guard until the thing cools down enough to be investigated, and Forrester elects to wait until morning in town.

Before he can return the meteorite opens up and a snake-like periscope rises from the crash. As the three men approach, the scope emits a shrieking heat-ray that atomizes them on the spot, and knocks out power to the town, alerting Forrester that something's happened and he finds out that Earth is under attack from Martian war-machines, shaped like flying manta-rays.**

The 1953 movie is interesting for its inclusion of nuclear power and weaponry into the mix—eight years after Hiroshima and amid other films that, at the time, used atomic energy to produce horrors in Nature. Religion is given far more importance in the 1953 movie than the novel (where Wells dismisses it entirely), although it proves ineffective in the short term, but is given the credit for the long-term outcome. Forrester stands in for Wells' unnamed narrator, separated from his fellow survivors and struggling to evade the war machines to get back to his wife—in the movie's instance, its the newly reunited Ms. van Buren, Forrester's former student. 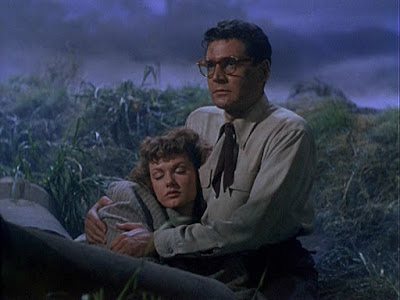 Pal's version became a classic, one of the few science fiction films that the Hollywood establishment took notice of besides its receipts (in no small part due to Cecil B. DeMille's championing of it), winning a de facto Oscar for its spectacular effects combining wire-and-model work and animation (the machines were so popular they were re-used in Pal and Haskin's Robinson Crusoe on Mars). It is still well-regarded as a superior sci-fi adventure film. The Wells estate was so enthusiastic with the result that they gave Pal the pick of any of Wells' stories to make another film of. His choice was "The Time Machine," which was released in 1960.

War of the Worlds (Steven Spielberg, 2005) Fifty two years after George Pal's film and sixty seven years after Welles' broadcast, Spielberg completed his unofficial trilogy of Earth invasion films (after Close Encounters of the Third Kind and E.T. the Extra-terrestrial) with his own version of the Wells story, again, updated for the times and without the article "the" in the title, so as to avoid confusion with the original. The invasion is, once again, world-wide, although attention is centered on the east coast of the United States.

This "War" was made within the memory of the 9/11 attacks, as Spielberg stages large infrastructure-dusting battles that tip over intersections and vaporize human beings (leaving their clothes to float empty to the ground). The attackers are not named as "Martians" but acknowledged as "other-worldly" with a suspiciously complicated origin—evidently, they've been long buried in the Earth, only needing the transmission of a spirit via lightning storm that simultaneously energizes the war-machines and knocks out the surrounding power grid. These machine are more the design of Wells original intent—ungainly tripods that still manage to do sizable damage with its heat-rays, black smoke, and red vegetation that carpets the area in a means of terra-forming (all from Wells' source). 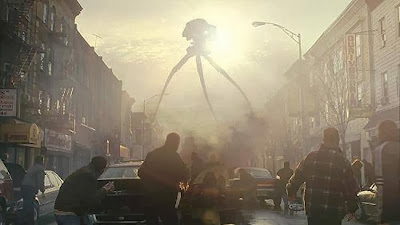 Although it may seem like a "typical" Spielberg project, it is an odd blend of Wells' and Spielberg's sensibilities, and in fact, anti-Spielberg sensibilities. Wells' story was about his narrator trying to get back to his wife amidst the chaos of the war. Spielberg has the same story-line, but his protagonist is another Spielberg "common man" (or as common as Tom Cruise will allow himself to be), who must rise to the occasion—in this case Cruise's Ray Ferrier is a dead-beat, uninvolved dad who must get his kids back to his estranged wife, amidst all the chaos. 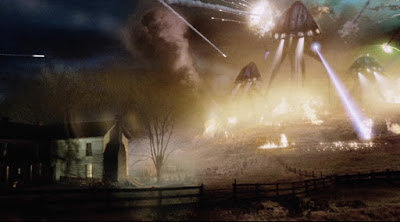 Given that CE3K and ET were films by a less mature Spielberg that broke families apart, offering a glimpse of the heavens, this time, Spielberg's protagonist is doing everything he can (as in Wells' novel) to re-unite his family. Spielberg has grown up by the time these aliens visit Earth. And yet, for all his heroics, the film has more in keeping with the ending of John Ford's The Searchers, as Ferrier is left standing in the street of his in-laws' brownstone (and they're played, naturally, by Gene Barry and Ann Robinson from the '53 version), satisfied enough that he has brought them together, but acknowledging that he is still an outsider without regard for acceptance as reward. He's done what he should have been doing all along. And mature enough now to not expect anything from it.

It's one of my favorite Spielberg endings. 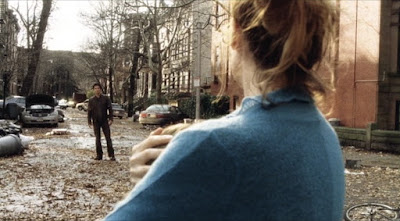 * The Slate article preceding this asterisk debunks the myth by citing lack of evidence—not the most reliable indicator—but what's strange is that when stations repeat the stunt (as reported on Radiolab's episode about the broadcast), the results tend to skew the same way.  There are always going to be a few that will panic, and with mob-mentality as an accelerant, things can get out of hand...even for Martians to handle.