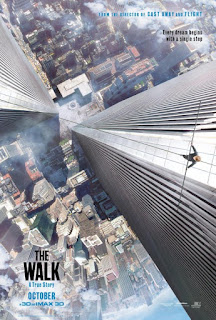 Dancing About Architecture
or
"Woah! Woah!.....Wooooow"

Phillipe Petit's astounding personal goal of walking a line between the towers of the World Trade Center (which occurred on August 7th, 1974 while the world was engaged in watching Richard Nixon's imminent resignation that evening) makes for an astounding movie by Robert Zemeckis in, what is simply entitled, The Walk—the story of Petit's inspiration and the subsequent six year plan to do something amazing, astounding, heroic and fool-hardy...and for damn sure illegal...and pull it off without a hitch, a wobble, and no harm done. It captures the imagination, the brio, the craziness, and the sheer over-arching artistry the event encompasses that can only leave one shaking their head in wonder.

The story has been told in the wonderful documentary Man on Wire, which is a fine telling of the event, itself so much bigger than a simple presentation could do justice to. But, there is some magical about The Walk, one of the few movies designed to make maximum advantage of both the 3-D process and IMAX that seeing it in any other way might diminish it somewhat—the too-visceral recreation of real objects that no longer exist and the vertiginous sensation that must be a part of the experience (and enhance the drama) are entwined in the format and make them part of the DNA in a way that few movies could compete with.

It begins with a shot of such chitzpah and imagination it immediately sucks you in, a combination of setting and presentation that only a vivid imagination with a dramatic sensibility would even conceive of, knowing full well that it might evoke laughter for its outlandishness, bur daring to do it anyway. very appropriate that it is our first introduction to Joseph Gordon-Levitt's portrayal of Petit, explaining his philosophy of life—and not death—while standing in the torch of the Statue of Liberty while in the background New York spreads out, the Twin Towers its centerpiece, as it will be for the entire movie. That is one wacky way to introduce the movie, but with a protagonist like Petit, who provides a running commentary throughout the film, it sets a tone of wildly big ideas and challenges, with just a touch of the romantic.

The movie begins with Petit's fascination with tightrope artists and how he teaches himself the fine art of walking a line. He becomes a street performer, silent except for his juggling and balancing skills in Paris, which Zemeckis throws all of the special effects and 3-D tricks he can to keep the sequence amusing. He is mentored by a long-time circus performer, Papa Rudy (Ben Kingsley), who teaches him the pointers on presentation and rigging, which will become critical throughout his career and particularly for the still-in-the-future WTC walk. 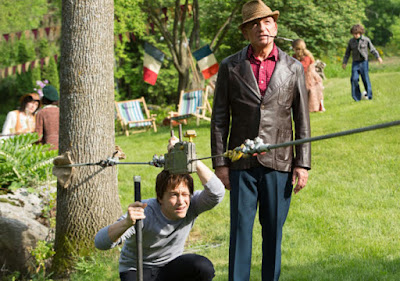 A fateful trip to the dentist's office is where the vision hits, when Petit first sees an artist's rendering of the proposed Trade Center, and immediately, like love at first sight, Petit's vision only sees the buildings with a line across it and himself walking across that line. It becomes his obsession and his raison d'etre, which Zemeckis illustrates with a special effect so subtle it might be missed—Petit steals the picture from the magazine and, at home, traces a pencil mark between the proposed towers. At one point, the shot becomes from the picture's perspective of Petit drawing the line, with the audience looking through the now-transparent paper at the concentrated Petit, drawing the vision in his mind and making it complete for the first time.

There's enough wizardry going on, story-wise and movie-wise—and Gordon-Levitt's portrayal is so radiantly buoyant that this section still manages to entertain, even going through the obligatory love story and the recruitment of a "posse" who are enthralled with Petit's scheme and want to be a part of it. Eventually, Petit and crew travel to New York to live and do the scouting and detail work associated with the mammoth undertaking.

Months of preparation go into the planning, with Petit daily going to the towers, still under construction, becoming a fixture and a familiar face to the workers and officials, who never suspect he has no business being there other than to learn the secrets and intricacies to getting up the towers to the top where he plans to stage his coup. Along the way he gathers confidantes and specialists who are intrigued and, more importantly, can keep their mouths shut, as Petit's stunt is completely and thoroughly illegal.

The main reason for the movie, of course, is that walk between the towers, so anything else is prologue.  Fortunately, the elaborate planning and skull-duggery that go into the engineering and realisation of the stunt is just as intricate and plays out like a "Mission: Impossible" movie with elaborate plans and unforeseen road-blocks that manage to get in the way of Petit's vision. 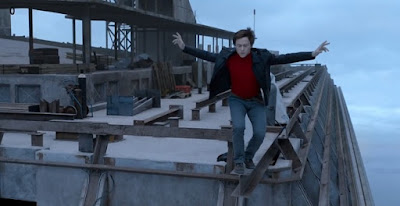 But, once there, after a sleepless night of preparing and rigging, Petit has only himself and his goal, and Zemeckis makes the most of the feat, with a dramatic presentation as the fog rolls in off the harbor at dawn and Petit must make good on his vision. He has one chance to do it, as no one could conceive of such a thing, but once attempted, it would never be allowed to happen again. There are no second chances and no room for screw-up's. It comes down to one man, his talent, and his will. 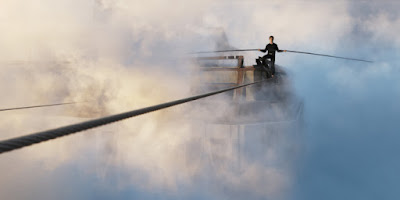 It is at this point one should mention that The Walk is stunning to look at—beautiful in its presentation and cinematography throughout and, of course, ingenious in the elaborate effects it took to recreate the event from every conceivable—and inconceivable—angle. There have been reports that people (probably those "sensitive" people everyone has to be mindful of these days) have gotten dizzy and even vomited at the sequence. It seems silly to me. For me—someone who's not so much scared of heights as FALLING from them—it is thrilling and, yes, beautiful...as Petit has always described it. It is almost unbelievable, were it not for the abundant photographic evidence and the witness testimony—especially of the NYPD (those poor cops!) who could only watch from the edge of the towers and marvel, unable to do anything but bear witness. 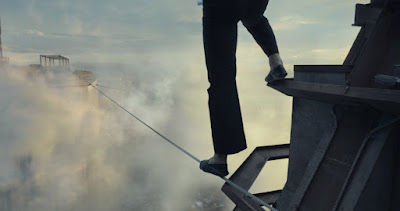 Once he placed both feet on the wire, he says, he was no longer afraid—he was in his "element," familiar, friendly, joyful—and it was a place to perform, like any other.

Once on the wire, Petit lost all fear of the feat. He walked across once, and sitting on the opposite tower and contemplating what he had done, he was compelled to do it again, and again, and again...at one point, kneeling on the wire to salute the horizon, the City of New York and the audience below gaping at him.  He went so far as laying down on it, even toying with the police, getting close to them, then neatly pirouetting and scampering away from them. It was a performance...and it was a coup, one that captured imaginations. 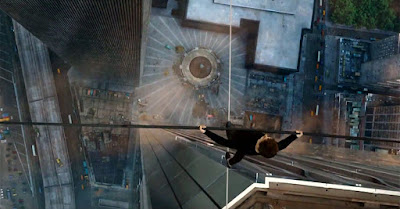 The Wire may be the most enjoyable film I've seen this year. I'm often unsure of the films of Robert Zemeckis—he's-hit and-miss with me—(I say this, of course, on the day everybody is thinking of Back to the Future, and, of the trilogy, Back to the Future II is my favorite, for retreading and warping the original like a Möbius strip). One of his most popular movies, Forrest Gump, I thought was an enormous bore, and worse, a movie that seemed to believe its own "simplistic" wisdom—Being There but without the satire. More often than not, I see his movies as technical exercises without much heart—they're merely an excuse to solve a narrative problem or to show off some special effect wizardry (which he employs very well) that makes the movie seem more like the tail wagging the dog.

But, not The Walk. It IS a fine balancing act keeping the movie afloat before you get to the third act, but Zemeckis pulls it off amazingly well, and there's not an aspect of the film I didn't think was inspired...and just a little mad, not unlike its protagonist.

Run, don't walk, to see it...and see it in as big and as dimensional as you can. This movie fills the frame. 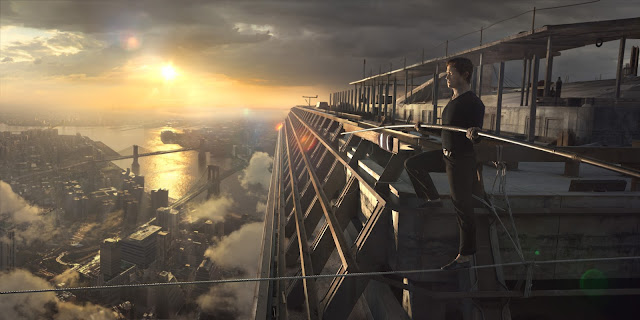 So, we did. We drove all the way from Brooklyn to Staten Island in the early morning dawn and joined the bustling commute into Manhattan. Pretty soon, it became apparent what "the draw" was. Sailing past Ellis Island and the Statue of Liberty were awe-inspiring, tracing the route so many had taken travelling to America. But Manhattan and its familiar skyline was the next stop. Dominating it all was the World Trade Center, gleaming—glowing—in the early morning sunlight. The ferry churned towards it as if being drawn like a magnet and the towers grew from a curiosity to an awe-inspiring sight to a wonder. Impossibly tall. Elegantly structured like a gate without a limit. Your eyes were drawn to the towers and you could not take your eyes off them as they beckoned, grew, loomed, and dwarfed you, majestically. It was a simple beckoning that became a challenging welcome to the country's greatest city. It moved me as the best moments travelling do, and, yes, not only did I not regret it, it became the most vivid memory of the trip, now as then, without any dimming or coloring in the passing of time and events.

Those towers are still there in my mind. And they will never leave.